Teapill Name: Ten Flavored Teapills
Chinese / Pin Yin Name: Shi Chuan Da Bu Wan
Ingredients: Ingredients may vary by brand.  Please check the brand for more information.
Shi Chuan Da Bu Wan Teapill Dosage: Follow your doctor's instructions for use.
Shi Chuan Da Bu Wan Teapill Precautions: Do not use if pregnant or nursing. Contraindicated during the early stages of acute infection or illness, such as cold or flu. Contraindicated for conditions due to heat. Use with caution in Spleen deficient patients with a tendency to loose stools, diarrhea, poor appetite or chronic digestive weakness.

Shi Chuan Da Bu Wan Teapills are an easy to take traditional Chinese herbal medicine that dispels cold and warms the Yang. It can help alleviate fatigue and tonify Qi. 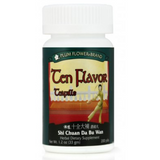